We love this place 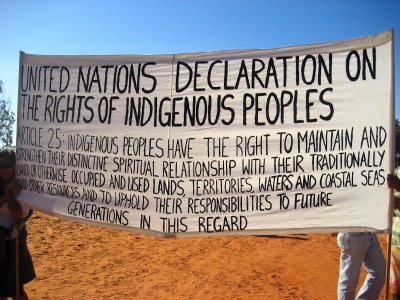 I had never read this article (from the UN Declaration on the Rights of Indigenous Peoples) before and during the day kept coming back to this banner, reading, re-reading and feeling so many things. I asked myself, is there any hope that such a declaration will genuinely be acknowledged by Australian governments and corporate interests, even the populous?

On this day people from all cultural, political and economic backgrounds came together to stand up for country – more specifically, Walmadany (James Prices Point) and the west Kimberley. We were all saying by being there, that we love this country. The question I am still left with… how am I, a non-Indigenous woman, and my immaterial connections with country visible, legitimized?

I didn’t talk much that day and have not written about it at all. Although I was there I strangely felt like an observer. I heard many people tell their stories of love and connection to country to police/riot squad members, in a bid to try and speak to the compassionate being that we hope is in us all. Each story was different but all essentially tried to voice the intention, ‘I love this place. I want to stay connected.’

A hypothetical… what if we were all Indigenous? We must be from somewhere. Collective struggles against land grabbing, like the Kimberley ‘No Gas’ campaign, are being played out around the world. Enmeshed in the these collective acts of trying to ‘protect’ country must be countless stories of being with…

Filed under The Campaign